The north of Thailand contrasts greatly with the busy city of Bangkok and the high energy beach resorts of the south.

The main destination is the ancient capital of the northern kingdom of "Lanna," Chiang Mai.

The city recently celebrated the 700th anniversary of its founding. The original city is still defined by a square perimeter wall surrounded by a moat. Within and without are a number of temples, some of which date to the city's founding.

Chiang Mai is home to many factories for the manufacture of silks, lacquerware, silver and other traditional crafts. The factories can be toured in the daytime, and a wide variety of goods may be purchased at the city's famous night bazaar. The best places to stay are, in fact, all within walking distance of the night bazaar. 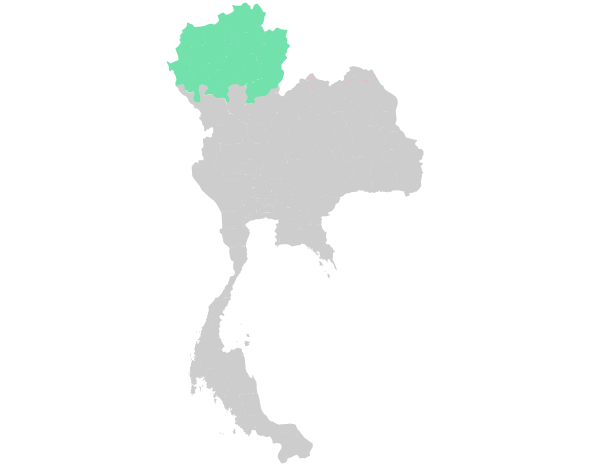 Sawasdee Khab! – On behalf of Asian Plus Travel; I would like to extend a warm welcome to the fascinating and historical region of Northern Thailand.

Asian Plus Travel is a totally new generation attitude boutique travel agent, looking to serve top-quality services, a well - deserved reputation for reliability and high service standards. We provide a wide range of services and always try our best to make our guests stay in Northern Thailand the most enjoyable experience possible.

Whether you want more information about our programs, our staffs, Asian Plus Travel will be happy to assist you. Our native professional and qualified guides will share their best knowledge and experiences with your clients during their tours. Your expectations will be our responsibility for these comprehensive tours.

I sincerely thank you for your future support and co-operation. If there is anything I can do for you on this end, just let me know and I will try my best to help.

Founded in 1296 by King Mengrai as the capital of the Lanna Kingdom, Chiang Mai is the second largest city of Thailand. Chiang Mai has had a long and mostly independent history, which has to a large extent preserved a most distinct Thai culture. Beyond the city, the province offers some of the most picturesque scenery in the whole kingdom, and is one of the forested mountains including Thailand’s highest peak at Doi Intanon.

Chiang Rai, the northernmost province of Thailand, is about 488 miles north of Bangkok. Situated on the Kok River basin, the province is located within the renowned Golden Triangle area where Myanmar, Laos and Thailand converge. Thus, Chiang Rai is also known as the gateway to Myanmar, Laos and Southern China

Nestled in a deep valley hemmed in by high mountain ranges, Mae Hong Son has long been isolated from the outside world. Virtually covered with mist throughout the year, it is now one of the dream destinations for visitors. Daily flights into its small airport bring growing numbers of tourists, attracted by the spectacular scenery, numerous hill tribe communities and soft adventure opportunities.

We offer the option of creating a private, fully customised trip for individuals, families and small groups. We'll carefully create a tour based on your budget, your choice of destinations, accommodation, and focus it on your interests. Our expert guides can show you aspects of Thailand that would normally elude the independent traveler. On any trip, we can combine any of the following elements to create a wonderfully rich and varied experience.

contact@asianplustravel.com
Just tell us what you want to do and where you want to go and we will do the rest!
CONTACT NOW
Our Associations
Our Awards
Our Office
259/208 Mahidol Road, Chang Klan, Muang, Chiang Mai - Thailand 50100